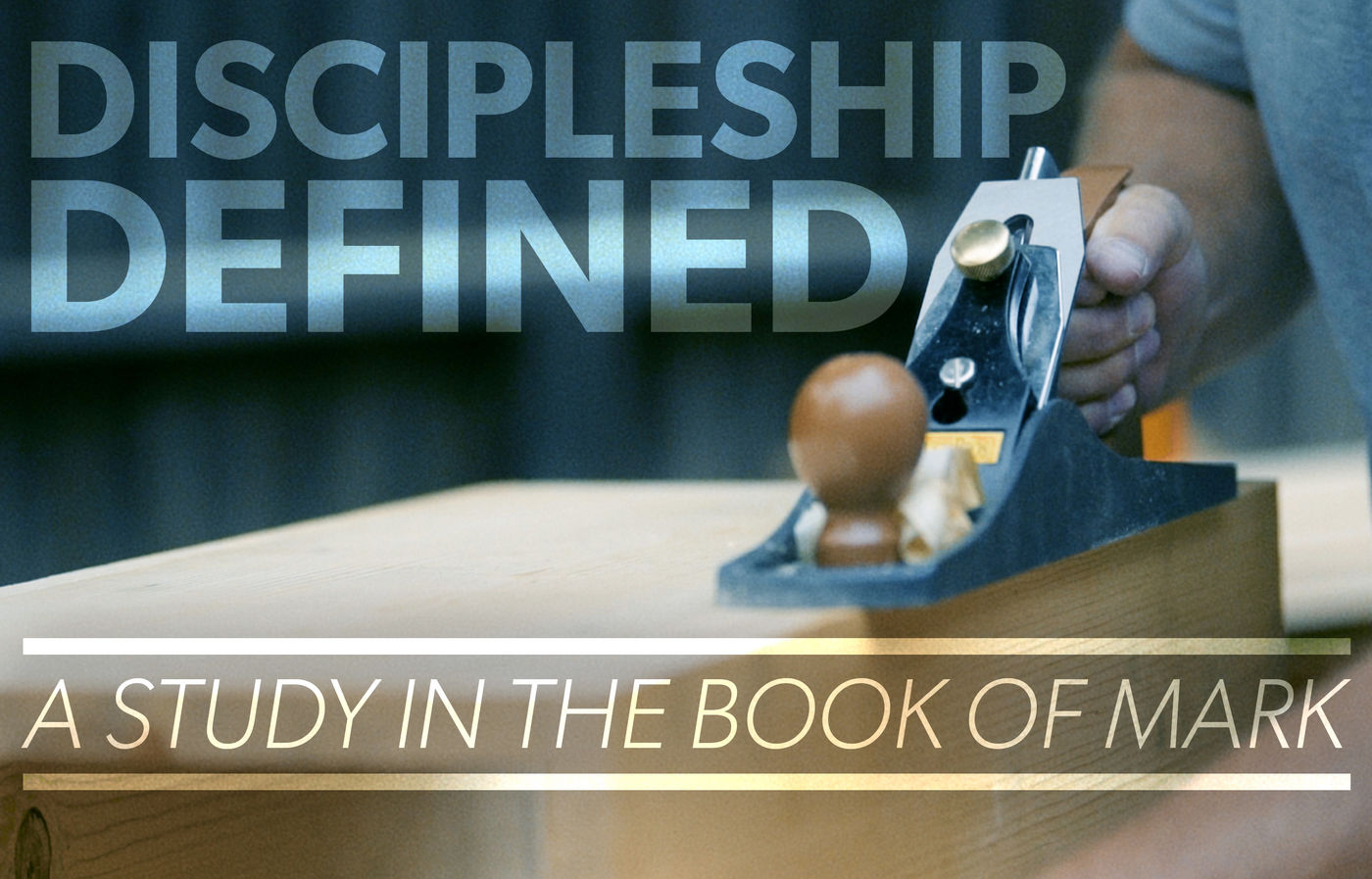 For the better part of a year, we will be studying the book of Mark together and the series title is Discipleship Defined. In light of the mission and the momentum God has been building in our church, I felt that it would be essential to define what our mission is again, which is glorifying God by making disciples. If you were to poll an assortment of Christians and ask them about discipleship, I believe the answers would vary just as much as the people. But think about it for a moment. How important is it to understand the mission clearly? If you fail to grasp it on a sports team, you’ll lose the game. If you fail to grasp it in a business project, you’ll squander the deal. Since our God-given mission is so much more important, doesn’t it seem right to be even clearer on what discipleship is and how it should be pursued? That’s why we’ve sought the help of the book of Mark. In the book of Mark, Jesus is the hero, the center, and sum of the story. Through his life, death, burial, and resurrection, we all gain a clear glimpse at what it looks like to be a disciple of Jesus Christ.

Mark writes like a man on a mission. He wasn’t influential by any means. He wasn’t recruited because he was a preacher, a pastor, a prophet, or a leader. Acts 13:5 describes him simply as an assistant. His gospel is anonymous because his name doesn’t mean much since his account is not about him. Mark wants all eyes off him and onto Jesus. Not only is Mark’s gospel not about Mark, it’s also not from him. Mark is writing from the perspective of Peter the eyewitness. This is why the book of Mark isn’t in chronological order. He wrote it as he heard it from Peter’s preaching. Mark also wasn’t perfect. He deserted his uncle and the apostle Paul on the 1st missionary journey (Acts 13:13). It was so bad that Barnabas and Paul split before the 2nd missionary journey (Acts 15:36-39).

Mark disappears from the records for a while, but shows up in the most amazing of ways. He somehow reconciles with Paul and becomes one of the few who stays as his companion. You might say, why would God recruit someone like Mark to have such a lofty responsibility as the writer of one of the 4 inspired recordings of the life and ministry of Jesus Christ? My response would be because God gets all the glory when he uses broken people to fulfill his mission of making disciples of Jesus Christ.

Mark was willing to record the flaws and weaknesses in both Peter and the disciples to show that discipleship only works when their faith is in Jesus alone. How easy is it to try to live the Christian life in your own strength. Mark reminds us, through the example of the disciples, that we must live through Jesus if we’re going to live like Jesus. He wrote in the historical present, so he could talk of past events as if they’re going on currently. It makes the reader feel Jesus is right there with them. They can immerse themselves into the text and live and learn from Jesus.

Mark’s pace is noted by commentators as being the fastest of the gospels. Over 40 times, the word “immediately” is used. Not only is Mark’s gospel immediate because of the nature of Peter’s witness but because of his missional intentionality. He is short and sweet, clear and vivid, and straight to the point because the mission depends on it. Mark’s ending is debated as being either quite abrupt or perhaps partially missing. For Mark though, the resurrection happened, so what more do you need? Jesus is God. He proved it in rising from the dead, and people need to know.

As we grow and time goes by, there is more distance between us and the core group stage where we emphasized our heart and vision for discipleship. My hope is that this will be a shot of adrenaline to our church as we put Jesus on display. The Father knows He’s God (1:11), Jesus knows He’s God (13:32), even the demons know he’s God (3:11; 5:7). But it’s not until the cross that people start to truly understand it. The cross makes sense of everything. It occupies center stage and unleashes people to make known who Jesus is and how to grow in Him. What you do with Jesus is everything. This is our mission: making disciples for the glory of God!

Worship: It's who you are

Hijacked: The Secret of Contentment

Looking Back and Looking Forward

Thank You for Three Years

What Should You Do With Santa?

Fall, Halloween, and a Biblical Perspective

Are you talking to yourself?

The Joy of Seeing People Grow in Small Groups

Top 5 reasons you need to participate in All-Church Prayer

From Church Plant to Church